King's walkway in the Mountains North of Malaga 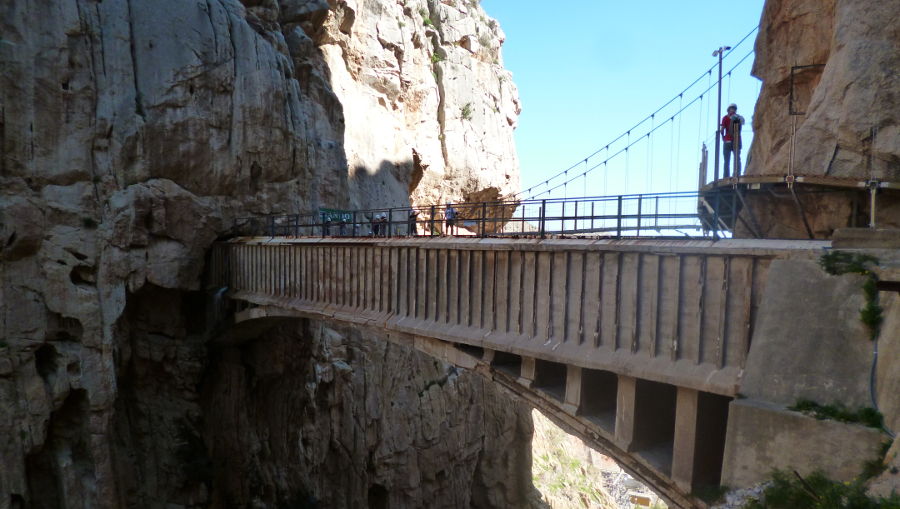 By car, from the hotel it would take you a little be more than an hour driving, at more of less 50 Miles. Initially this mountain path will be free of access, until end 2015.

It's a perfect trip from Villarocamar, those new facilities where totally refurbished the last four years, and the main target was to offer a total security for the visitors.

Advance reservations are essential. It's possible to make up to a maximum of five reservations per person on the following website : www.caminitodelrey.info

The walkway was built to provide workers at the hydroelectric power plants at Chorro Falls and Gaitanejo Falls with means to cross between them, to provide for transport of materials, and to facilitate inspection and maintenance of the channel. Construction began in 1901 and was finished in 1905. In 1921 King Alfonso XIII crossed the walkway for the inauguration of the dam Conde del Guadalhorce, and it became known by its present name.

The walkway is 1 meter (3.3 ft) in width, and rises over 100 meters (330 ft) above the river below. Constructed of concrete, resting on steel rails supported by stanchions at around 45 degrees into the rock face, it is currently in a highly deteriorated state and there are numerous sections where part or all of the concrete top has collapsed. The result is large open air gaps that are bridged only by narrow steel beams or other support fixtures. Very few of the original handrails exist but a safety-wire runs the length of the path. Several people have lost their lives on the walkway in recent times and, after two fatal accidents in 1999 and 2000, the local government closed both entrances.

In June 2011 the regional government of Andalusia and the local government of Málaga agreed to share costs of restoration (including car parking and a museum) of €9 million. The project will take approximately three years to complete. Many of the original features will remain in place and the new materials that are used will be in keeping with the old design.

In March 2014, the cornerstone of the rehabilitation project was laid by specialized alpinists. The walkway will reopen during Easter 2015 (29th March) and was listed in the best new attractions for 2015 by Lonely Planet.